What's On My Bookshelf!

After making my intro video to Rites of Passage, I realized some people might be interested in the books on my bookshelf right at this very minute. Now, these are by no means all the books in my house. These are just the books in my office. We have about a million books scattered all over the house, but these are my (mostly) YA books. :-) When am I going to read all these? I have no idea. Will that stop me from buying more? Of course not! 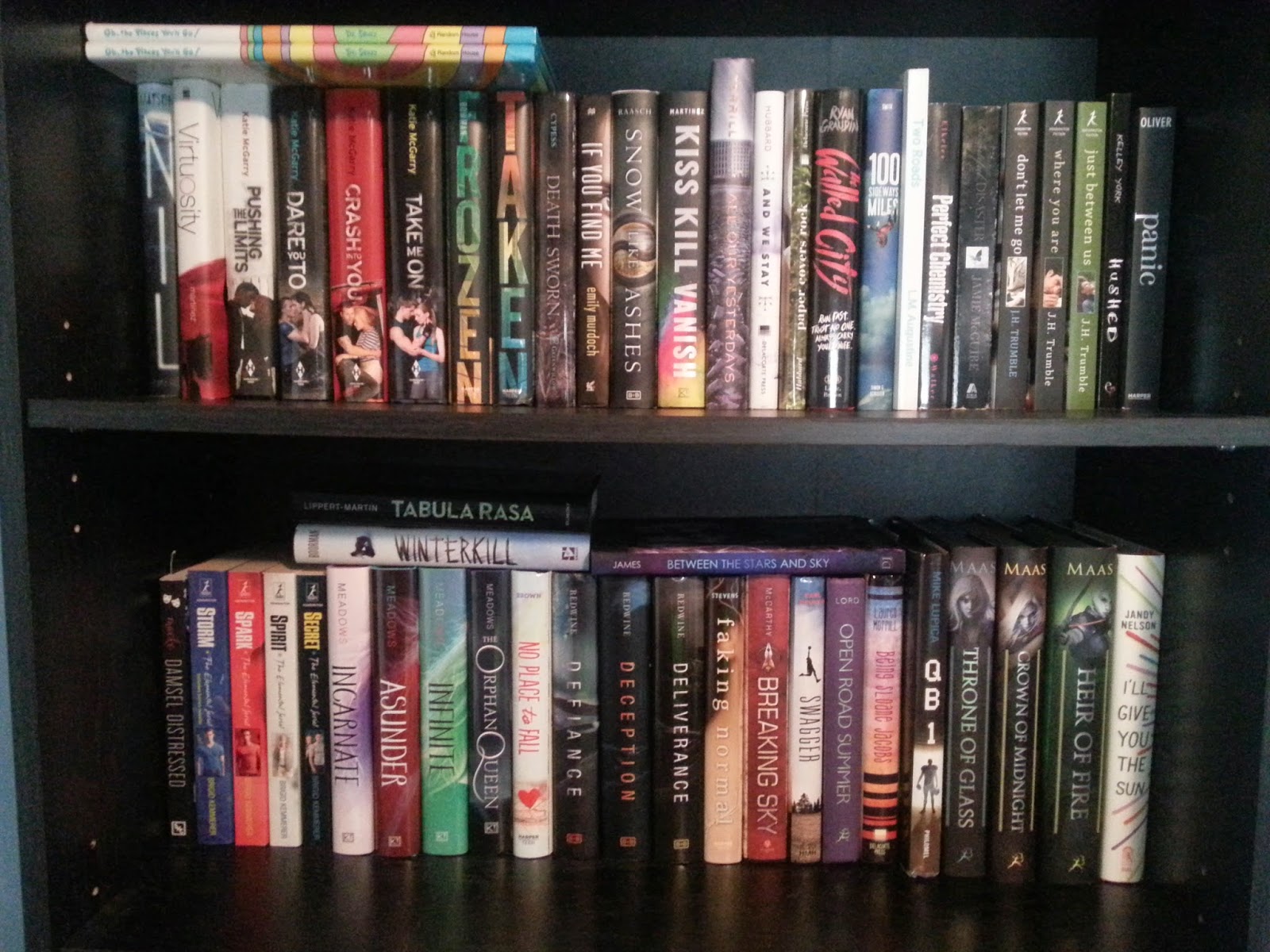 The top two rows are books I've read and am keeping around! Some of them are signed, even!
*There are a few missing that I've loaned out--Stolen by Lucy Christopher, Winger by Andrew Smith, and....I can't remember the rest! Ack!Time to hunt down my friends.

Nil by Lynne Matson
Virtuosity by Jessica Martinez
Pushing the Limits by Katie McGarry
Dare You To by Katie McGarry
Crash Into You by Katie McGarry
Take Me On by Katie McGarry
Frozen by Erin Bowman
Taken by Erin Bowman
Death Sworn by Leah Cypess
If you Find Me by Emily Murdoch
Snow Like Ashes by Sarah Raasch
Kiss Kill Vanish by Jessica Martinez
All Our Yesterdays by Cristen Terrill
And We Stay by Jenny Hubbard
Paper Covers Rock by Jenny Hubbard
The Walled City by Ryan Graudin
100 Sideways Miles by Andrew Smith
Two Roads by L.M. Augustine
Perfect Chemistry by Simone Elkeles
Beautiful Disaster by Jamie McGuire
Don't Let Me Go by J.B. Trumble
Where You Are by J.B. Trumble
Just Between Us by J.B. Trumble
Hushed by Kelley York
Panic by Lauren Oliver
Damsel Distressed by Kelsey Macke
Storm by Brigid Kemmerer
Spark by Brigid Kemmerer
Spirit by Brigid Kemmerer
Secret by Brigid Kemmerer
Incarnate by Jodi Meadows
Asunder by Jodi Meadows
Infinite by Jodi Meadows
The Orphan Queen by Jodi Meadows
No Place to Fall by Jaye Robin Brown
Defiance by CJ Redwine
Deception by CJ Redwine
Deliverance by CJ Redwine
Faking Normal by Courtney Stevens
Breaking Sky by Cori McCarthy
Swagger by Carl Deuker
Open Road Summer by Emery Lord
Being Sloane Jacobs by Lauren Morrill
QB1 by Mike Lupica
Throne of Glass by SJ Maas
Crown of Midnight by SJ Maas
Heir of Fire by SJ Maas
I'll Give You the Sun by Jandy Nelson
Tabula Rasa by Kristen Lippert-Martin
Winterkill by Kate Boorman
Between the Stars and Sky by David James

The next four shelves (and a row of books on the floor) are my to-be-read (TBR) pile. 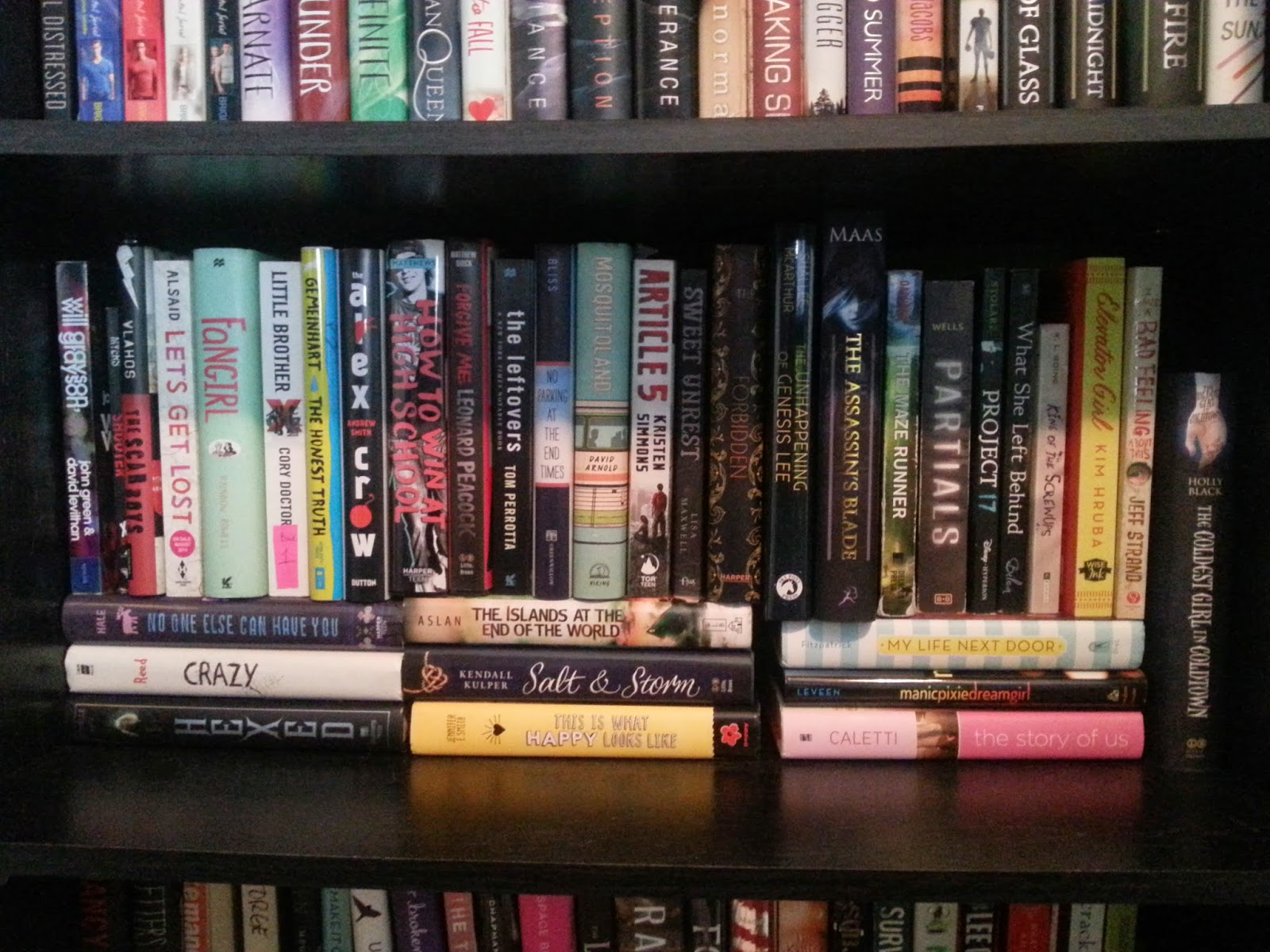 Will Grayson, Will Grayson by John Green and David Levithan
Shooter by Walter Dean Myers
The Scar Boys by Len Vlahos
Let's Get Lost by Adi Alsaid
Fangirl by Rainbow Rowell
Little Brother by Cory Doctorow
The HOnest Truth by Dan Gemeinhart
The Alex Crow by Andrew Smith
How to Win at High School by Owen Matthews
Forgive me, Leonard Peacock by Matthew Quick
The Leftovers by Tom Perrotta
No Parking at the End Times by Bryan Bliss
Mosquitoland by David Arnold
Article 5 by Kristen Simmons
Sweet Unrest by Lisa Maxwell
Forbidden by Kimberly Griffiths Little
The Unhappening of Genesis Lee by Shallee McArthur
The Assassin's Blade by SJ Maas
The Blad Runner by James Dashner
Partials by Dan Wells
Project 17 by Laurie Foria Stolarz
What She Left Behind by Tracy Bilen
King of the Screwups by KL Going
Elevator Girl by Kim Hruba
I Have a Bad Feeling AboutThis by Jeff Strand
The Coldest Girl in Coldtown by Holly Black
No One Else Can Have You by Kathleen Hale
Crazy by Amy Reed
Hexed by Michelle Krys
The Islands at the End of the World by Austin Aslan
Salt and Storm by Kendal Kulper
This is What Happy Looks Like by Jennifer Smith
My Life Next Door by HuntleyFitzpatrick 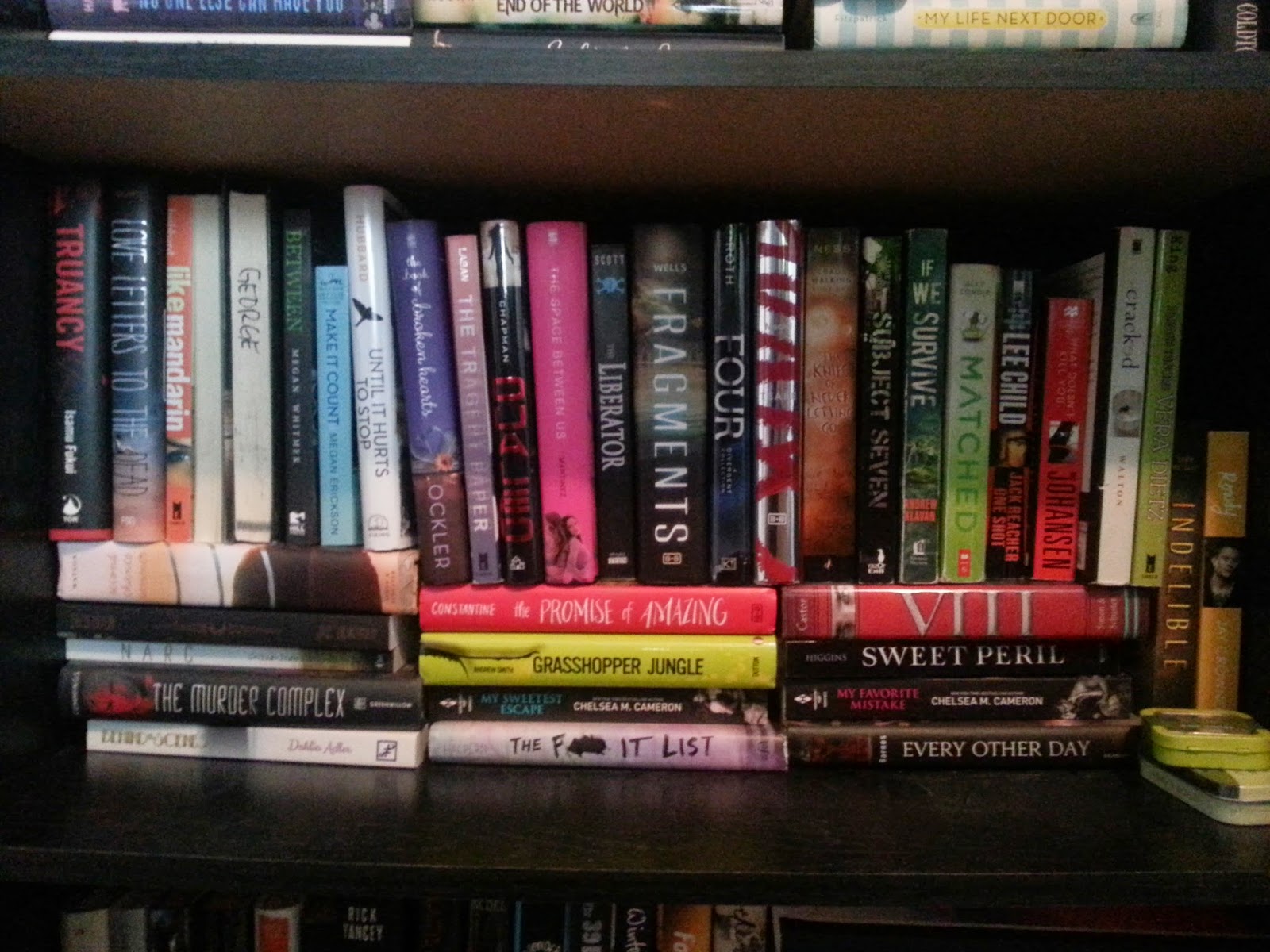 Truancy by Isamu Fukui
Love Letters to the Dead by Ava Dellaira
Like Mandarin by Kristen Hubbard
Undercurrent by Paul Blackwell
Struck by Lightning by Chris Colfer
Between by Megan Whitmer
Make it Count by Megan Erickson
Until it Hurts to Stop by Jennifer Hubbard
The Book of Broken Hearts by Sarah Ockler
The Tragedy Paper by Elizabeth Laban
Dualed by Elsie Chapmafn
The Space Between Us by Jessica Martinez
The Liberator by Victoria Scott
Fragments by Dan Wells
Four by Veronica Roth
Tease by Amanda Maciel
The Knife of Never Letting Go by Patrick Ness
Subject Seven by James Moore
If I survive by Andrew Klavan
Matched by Ally Condie
Jack Reacher: One Shot by Lee Child
What Doesn't Kill You by Iris Johanson
Cracked by K.M. Walton
Please Ignore Vera Dietz by A.S. King
Indelible by Dawn Metcalf
Rowdy by Jay Crownover
Second Chance Summer by Morgan Matson
Narc by Crissa-Jean Chappell
The Murder Complex by Lindsay Cummings
Behind the Scenes by Dahlia Adler
The Promise of Amazing by Robin Constantine
My Sweetest Escape by Chelsea M. Cameron
The F-It List by Julie Halpern
VIII by by H.M. Castor
Sweet Peril by Wendy Higgins
My Favorite Mistake by Chelsea M. Cameron
Every Other Day by Jennifer Lynn Barnes 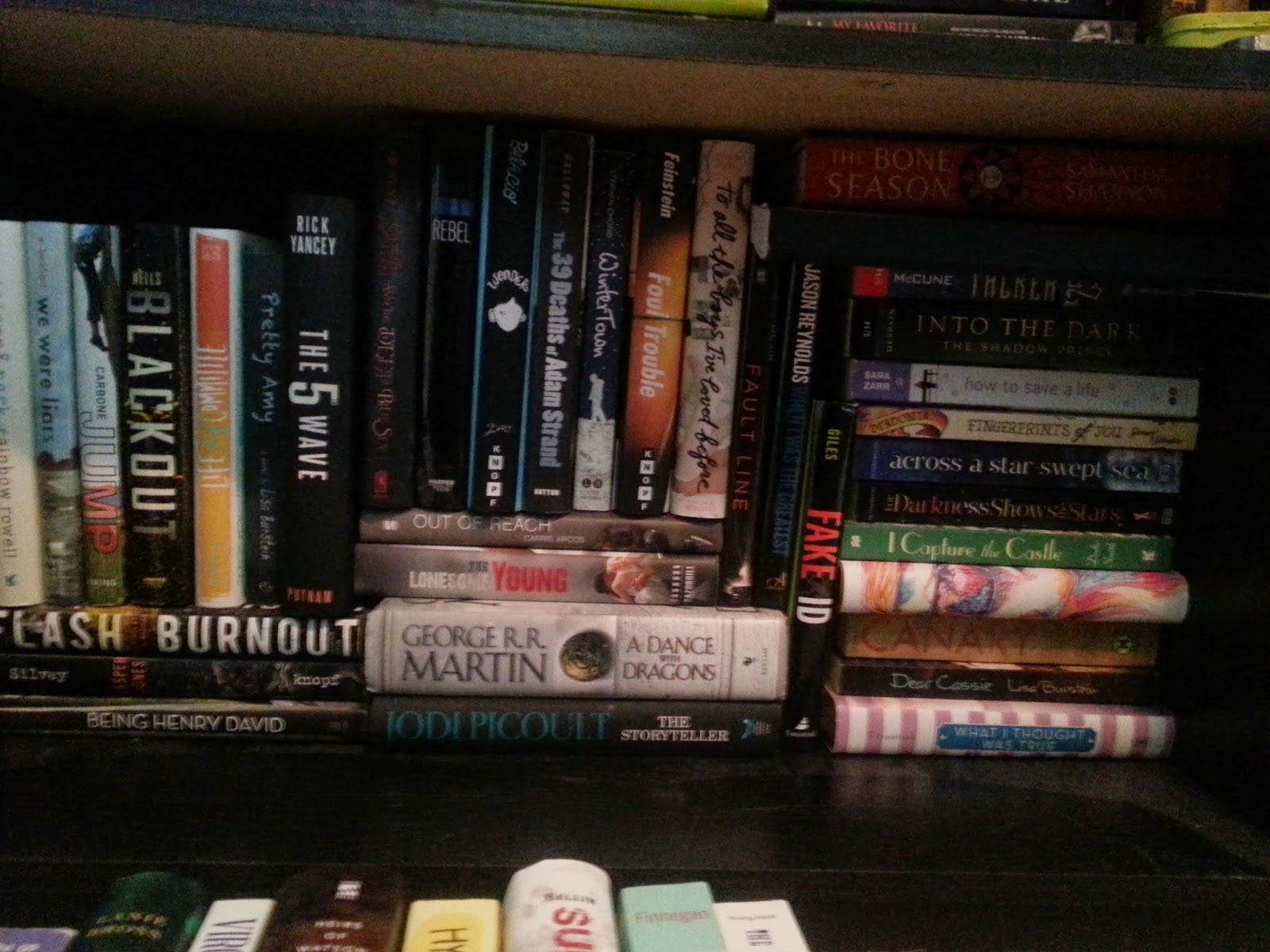 Eleanor and Park by Rainbow Rowell
We Were Liars by E. Lockhart
Jump by Elisa Carbone
Blackout by Robison Wells
Life By Committee by Corey Ann Haydu
Pretty Amy by Lisa Burstein
The Fifth Wave by Rick Yancey
Between the Devil and the Deep Blue Sea by April Genevieve Tucholke
Rebel by Amy Tintera
Wonder by RJ Palacio
The 39 Deaths of Adam Strand by Gregory Galloway
WinterTown by Stephen Emond
Foul Trouble by John Feinstein
To All the Boys I've Loved Before byJenny Han
Fault Line by Christa Desir
When I was the Greatest by Jason Reynolds
Fake ID by Lamar Giles
The Bone Season by Samantha Shannon
Under a Painted Sky by Stacey Lee
Talker by Joshua McCune
Into the Dark by Bree Despain
How to Save a Life by Sara Zarr (huh. A duplicate!)
Fingerprints of You by Kristen-Paige Madonia
Across a Star-Swept Sea by Diana Peterfreund
For Darkness Shows the Stars by Diana Peterfreund
I Capture the Castle by Dadie Smith
Sinner by Maggie Stiefvater
Canary by Rachele Alpine
Dear Cassie by Lisa Burstein
What I Thought Was True by Huntley Fitzpatrick
Flash Burnout by LK Madigan
Jasper Jones by Craig Silvey
Being Henry David by Cal Armistead
Out of Reach by Carrie Arcos
The Lonesome Young by Lucy Conners
A Dance with Dragons by George RR Martin
The Storyteller by Jodi Picoult 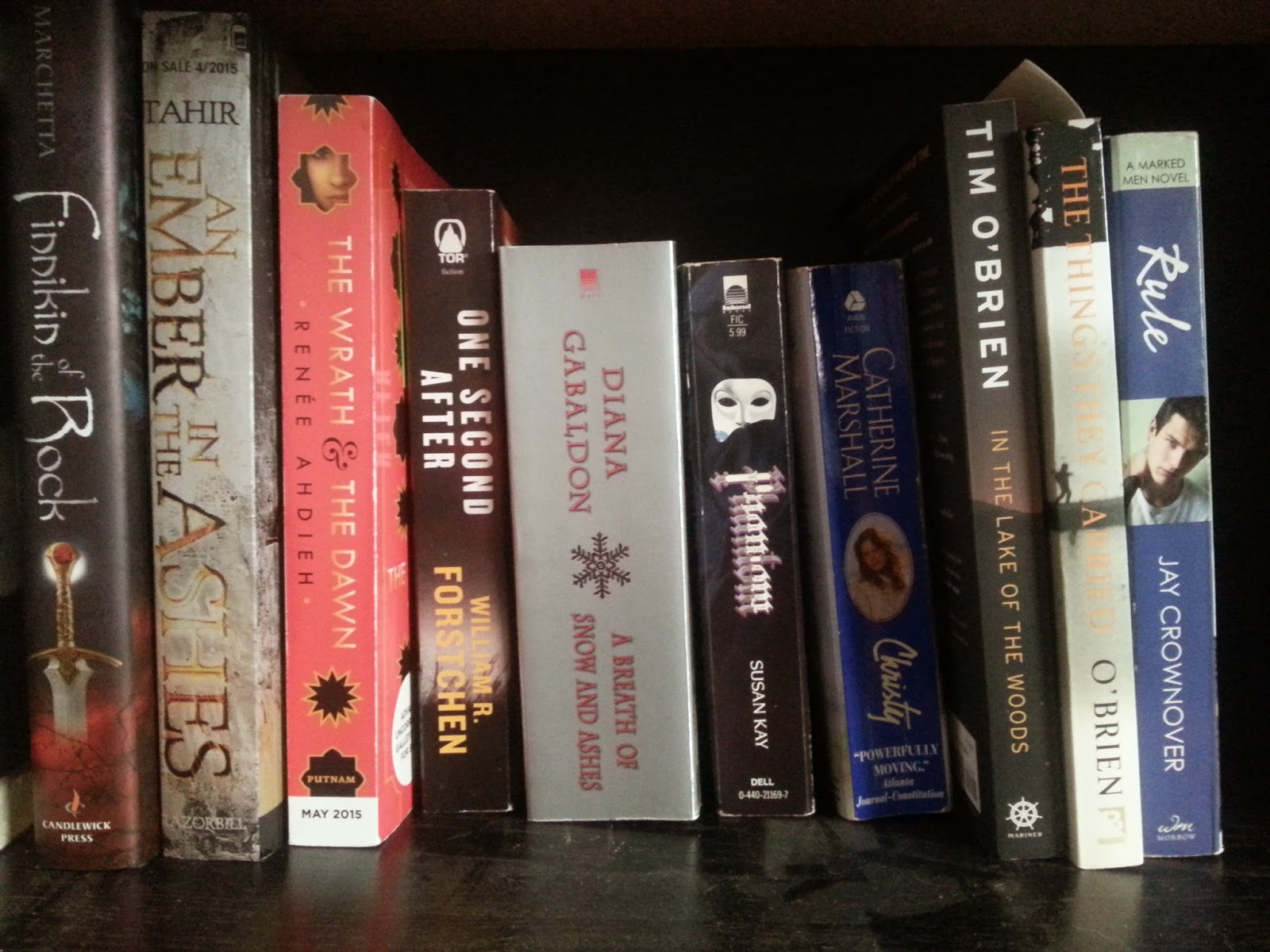 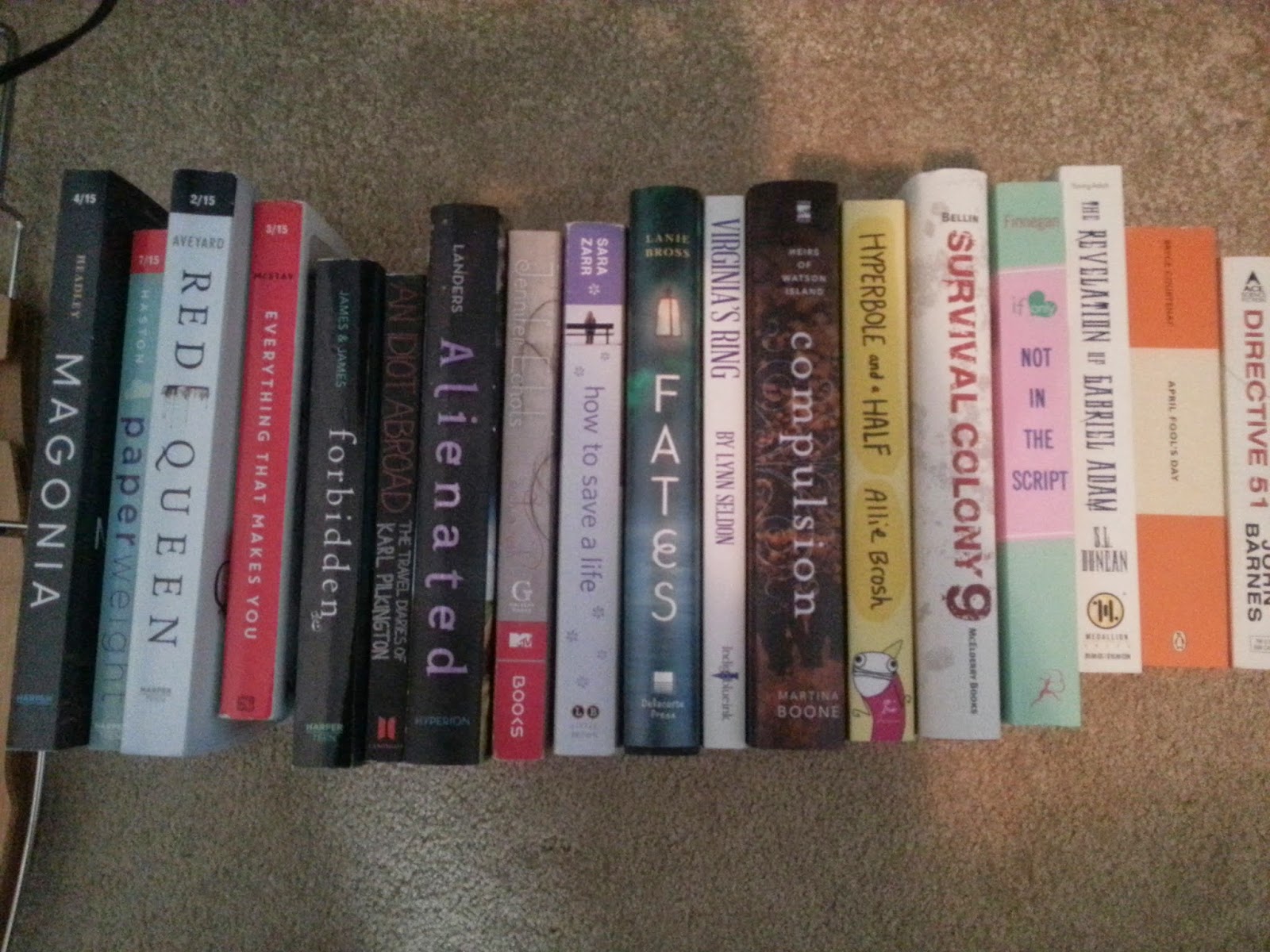 Magonia by Maria Dahvana Headley
Paper Weight by Meg Haston
Red Queen by Victoria Aveyard
Everything That Makes You by Moriah McStay
Forbidden by Syrie James and Ryan M. James
An Idiat Abroad by Karl Pilkington
Alienated by Melissa Landers
Such a Rush by Jennifer Echols
How to Save a Life by Sara Zarr
Fates by Lanie Bross
Virginia's Ring by Lynn Seldon
Compulsion by Martina Boone
Hyperbole and a Half by Allie Brosh
Survival Colony 9 by David Bellin
Not in the Script by Amy Finnegan
The Revelation of Gabriel Adam by SL Duncan
April Fool's Day by Bryce Courtenay
Directive 51 by John Barnes
Posted by Joy N. Hensley at 10:34 AM