Prologue to The Call: The Day the Toilet Almost Exploded

Alright, alright. I know it's been a long time since I posted, but I didn't think you'd want a daily report of rejection letters, right? I mean, that's just depressing.

Instead, I saved up all my wonderfulness for this post which I knew would come sooner or later!

A lot of people like to hear about "The Call" so I thought I'd share mine with you. Hope that's okay!

Tuesday, August 23 started like any other day. Actually, it didn't. See, I'm a teacher and the day in question was the first day students came back to school. For those of you who aren't teachers, you don't understand.

The first day of school is scary.

Why? Because all summer I've been able to go to the bathroom when. I. want. (Yes, there's a point to this, I promise, and it's not that I took the call in the toilet because, well, that would be weird. And yes, I'm talking to you, all those people who talk on their phones while I'm trying to pee in Wal-Mart!) And now, because of schedules and holding hands on the first day of school there is literally No. Time. To. Go.

So, I get a little nervous and stressed out. What if I need to go? What if I don't have time? I really don't want to embarrass myself during the first day of school......and it's just a downward spiral of badness and negative thinking.

And, here we are. First day of school. Nervous about potty breaks. I've had two cups of coffee (bad idea, I know) and it's now lunch time. I need to go. I have to go. I do not have time because kids forget lunch boxes in lockers, they forget locker combinations, they forget they're in school. It's insanity.

Finally I saw it. A five minute break to check e-mail and run to the loo. E-mail first, because, who am I kidding? If I were in a burning building, I'd totally geek out and check my e-mail before running to a fire escape.

But, see. Here's a good reason I did! There was an e-mail in my box from Mandy Hubbard! It had only been four days since I sent her my revised full draft, so I'm thinking two things:

1. She's writing to tell me she'll put it on her reading schedule and when she thinks she'll get to it.

2. She's rejecting me already. Somehow, someone else had sent her an Australian story with a kilt-wearing aborigine that she loved even more.

I didn't even want to read it. I wasted seriously potty-venturing time to agonize over the decision. Finally I convinced myself to open it. She said she'd stayed up late and read my manuscript last night. Then she wanted to know if she could call me.

See, she even tweeted about it! 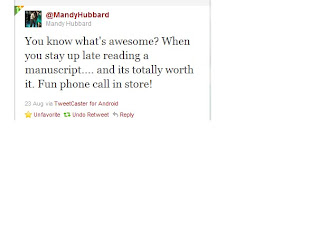 But even after seeing that post, I tried to calm myself down while I was walking to the bathroom. She's just calling to say "Thanks, but no thanks." And then, I started getting depressed. Another "close but not quite there" rejection. IMHO, those are the WORST!

When I flushed the toilet, I noticed it started making this horrible groaning/screaming sound. "Get thee behind me, Moaning Myrtle!" I shouted. But the sound didn't stop. Then I knew what happened.

I broke the toilet.

I walked as nonchalantly as possible out of the bathroom, only to see a hoard of people outside in the hallway. "OMG, they know. They know I broke the toilet and killed Moaning Myrtle. I'm going to get killed by a gaggle of sixth graders!"

But, no. These silly little innocent, shell-shocked sixth graders on their first day of school told me there had been an earthquake! Bless their sweet little hearts. "Never fear," I told them. "Earthquakes are for Cali, not here!" I finally convinced them there is a self-destructing toilet in the Teacher's Lounge. That's why they're not allowed in there. If someone's going to drown, better it be a teacher than them!

I headed back to my room to figure out what in the world I was going to ask Mandy when she called so I could look as professional as possible. Also, I was trying not to cry at the thought of rejection. It's a true story. Oh, and here's another part of the story that's true. There WAS an earthquake! Oops.......

To Be Continued
Posted by Joy N. Hensley at 6:07 AM

Very eventful day! I remember seeing her tweet about that. Congrats again!

Congratulations! I can't wait for the next part.

Thanks, ladies! I'm still just completely over the moon--I think I will be for ages! Next post coming this weekend!

Misty, glad you found your way over! She gave me your e-mail addy a few weeks ago, but needless to say things have been busy!

I can imagine! I'm so happy for you, and obvs a little jealous:) So exciting. I just got the big rejection for a full from Sourcebooks, so I'm glad you had better luck!

Screaming with laughter! It's such a crazy story, complete with a well-deserved HEA!

I totally saw that tweet by Mandy! Congratulations, Joy! That is such exciting news! So happy for you! :)

This. Story. Is. Amazing.

I laughed so hard. So, so hard. Can't wait for the next part!

I saw that post too and for a fraction of a second, knowing I had a manuscript on Mandy's desk, my heart did a little skip. I am so excited for you - absolutely loved your 'call' story. It's great to have an amazing story to go with an amazing moment. (Coming from someone who is recovering from two broken feet incurred when I tripped leading worship at church and fell down three small steps - not an amazing story to tell when people ask what happened!) Best of luck going forward!

Congrats to a fellow dreamer from Overtherainbow.

Oh, I laughed out loud at your story! As a teacher and writer, I can totally relate! I read it to my 6th grade daughter and she was laughing too. can't wait until your book comes out- it's obvious from this blog post that you're a great storyteller. Good luck on the rest of your journey! Miriam (Mandy's also my agent- you'll love her. Congrats!!)