When Dreams Become Reality, or the Making of Your Book into Television or Movie 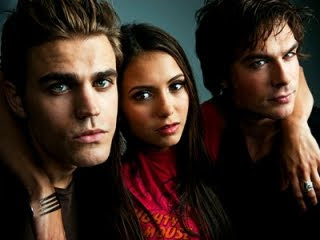 Alright, so by now, everyone should know my obsession with vampires. Hubby says "neutered" vampires, but whatever. I like the romantic vampires. Yes, I realize this is absurd. Yes, I realize vampires (if they existed) were meant to prey, hunt, stalk, rip, kill, etc., etc.

But I don't like horror, so deal with it.

Now that we're done with that, on with the blog post.

My favorite show right now has to be The Vampire Diaries. Remember, I don't have television, so I have to wait until the CW puts up it's new episodes. But, I did buy myself a little xmas gift, the first season on DVD, and have been obsessing over it ever since.

When I was in high school, yes, I read The Vampire Diaries by LJ Smith. But that was a long time ago.

So when I found out the show was coming out, I reread the books. I remember why they didn't make much of an impression and I will not delve into the wealth of material that sounds mysteriously like Twilight. That could fill it's own post.

But, over at Nathan Bransford's Blog he's talking about good film adaptations. I would like to argue that one of the best television adaptations is TVD.

1. In the books, Elena is a b*%$^. A MAJOR one. She plots to get what she wants and she doesn't care who gets in the way. In the show, Elena is totally sympathetic and you have a reason to like her. She cares about what everyone thinks.

2. I generally enjoy reading a book and getting an idea of what a character looks like in my head, but in TVD series, all I got was that Elena was BLOND. God forbid we forget that fact. In the show, I see concrete (and yes, hot) characters. I enjoy the beauty of this show whereas in other television shows the beauty of the people just gets obnoxious. Yes, it probably has something to do with the fact that they're vampires.

3. THEY GET THE FANGS RIGHT! Even in one of my favorite vampire movies, The Lost Boys, the fangs are wrong. The vampires don't look...right. Or, how I think vampires should look. Everyone knows, or SHOULD know, that fangs elongate from the canine teeth. How do so many people get it wrong? The Twilight vamps don't even GET fangs. Talk about neutered vampires....

4. The love triangle. Need I say more? Good vamp. Bad vamp. Human girl. So powerful on-screen where I thought the books were kind of just...eh.

5. Which brings me to the most important part. The plot. Now, LJ Smith herself doesn't like where the show is headed. She doesn't like that they've changed her characters, invented new ones, changed love stories, etc. I, on the other hand, LOVE the show. I love the plot, the twists, the turns. I love Jeremy. I love Bonnie. I love Caroline. I love everything about the show. Where the books turn kind of weird with Stefan in purgatory and all of that, the show keeps it realistic. Yes, I realize I used realistic when talking about vampires, but anyone who's seen Buffy understands. Vampires can be very realistic if you allow yourself into their world.

Now, I can't say that I wouldn't be mad if my book got published and then people started bashing it about and changing into a television show that only resembled the skeleton of the baby I worked so hard on. But, I would like to think that if I ever did get that opportunity, and that was my cast and that was my plot...I would be happy.

What do you think? About TVD or what book has been turned into a great movie/tv show?
Posted by Joy N. Hensley at 7:34 PM

M*A*S*H was a very funny book, which was turned into a very funny movie ... and (for a few years at least) a pretty good TV show.

I too am loving the vampire scene. Vampire Diaries is my favorite show on tv (don't have cable so I also watch on CW.com). I'm glad you posted about this because I've been considering buying the books and don't know anyone who's read them. Would you recommend them at all then? (p.s. Found your blog link from Nathan Bransford's blog.)