Book Review: The Face of a Memory by Charlie Palumbo 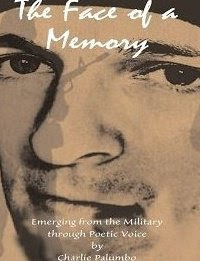 Disclosure: I have known author Charlie Palumbo my entire life. However, this is the first work of hers I have ever read in any context.

The Face of a Memory: Emerging from the Military through Poetic Voice is a sixty-page memoir of a sailor’s life at sea. Palumbo served in the United States Navy. But before you think you’ve read it before: you haven’t. Palumbo served during 9/11 and the aftermath, however, she was not involved in combat. She gives us the nitty-gritty of being in the military without the heroics of war.

Palumbo’s story is that of the everyday military servicemen and women who serve everyday out of the lime light. We see the price of brotherhood and the effect that such close quarters has on friends, lovers, and family. What is unique about this memoir, however, what sets it apart, is that Palumbo uses poetic voice to show the interaction between her and her shipmates.

Told in vignettes, The Face of a Memory introduces us to many sides of Palumbo and various crew members such as The Survivor, The Quiet Brother, The Angry Captive, Queen Abercrombie, The Gypsy Woman, and Dancing Bear, among others aboard the ship.

Through her sketches, we are pulled into life on the ship. Readers from the armed forces will recognize battle buddies, shipmates, airmen, and fellow Devil Dogs in these pages. The people Palumbo describes, and her interactions with them, could in fact be any one of several of my good friends.

The art in the memoir, however, is how Palumbo weaves her life into those of her friends and enemies on deck. She grows, not only in the course of the book, but in the final words she leaves us with.

The Face of a Memory is not your average memoir. Palumbo does not hold on to the negative and exploit it. Instead, we see Palumbo as she was, Palumbo as she is now, and how she used her writing, her art, her very soul, to put a face to her memories and make them something she could address and grow from.
While I would have liked to have seen more concrete scenes where Palumbo sometimes hints rather than explicitly lays out what happened, I am hoping that The Face of a Memory might be followed up with something like The Body of a Memory, giving us insight into the actual situations this poetry comes from. My fingers are crossed.

And, if the words themselves aren’t enough to make you want to buy the book, there’s more. Palumbo is an activist for veteran causes. She is donating 80% of her profits to Give an Hour, a non-profit that gives free mental health services to veterans. Palumbo helped herself by putting the words on paper, and is helping others by giving them the chance she indeed may wish she had gotten earlier.

Learn more about Palumbo and purchase her book at Veteran Artist.
Posted by Joy N. Hensley at 8:04 PM

This makes my soul dance!! The fact that you got it all and articulated it so beautifully is fantastic!! Thank you for this review and thank you for your support. It is words like yours that will encourage me every step of the way. Regards, charlie